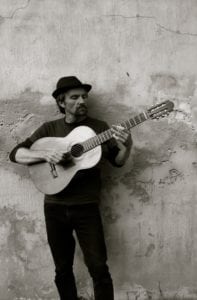 Hailing from Geelong, Rod Gear has travelled the world sharing his musical gifts. He’s a founding member and key song-writer of the Australian band Sons of Korah.

He began his musical career studying jazz at VCA in 1985, and hasn’t stopped learning since. Audiences are captivated with his high level of expertise on the five string double bass, and his incredible multi-instrumental capacities.

And Rod doesn’t just keep his gifts locked up in venues, he loves taking his music to the street. In fact, his latest 2 albums – ‘As Gently Falls’ and ‘The Woods That Sings’ evolved on the footpaths and in the malls across Australia.

Rod now lives in the country just outside Geelong with his wife Angela and his three children.